The second generation of algorithms for POLDER involves a set of bimodal aerosol models and enables to retrieve additional parameters, such as the optical thickness of the accumulation mode and the contribution of the spherical and non-spherical particles to the optical thickness.
Reference:
Herman M., Deuzé J.L., Marchand A., Roger B., Lallart P., 2005:
Aerosol remote sensing from POLDER/ADEOS over the ocean: Improved retrieval using a nonspherical particle model
Journal of Geophysical Research, Vol 110, N° D10S02, doi: 10.1029/2004JD0044798.

Mean value of the Angstrom exponent over the Ocean on May (left) and June (right) 2003.

The largest values appear in North-West Pacific Ocean, corresponding to biomass burning and pollution from Siberia and northern China. In this zone, the accumulation mode (small particles) dominates and the aerosol thickness of this mode is close to the total optical thickness as the Angstrom exponent. The same results are found near Mexico over a less important region.
On the contrary, several areas (Atlantic Ocean from Western Africa to Central America, Red Sea) exhibit very large total optical thickness (up to 0.8) compared to the small mode one (0.06). In such regions where the Angstrom exponent is rather low (~0.6), the large mode dominates.

Mean Angstrom exponent of the accumulation mode on May (left) and June (right) 2003.

Mean optical thickness of large non spherical aerosol at 865 nm on May (left) and June (right) 2003.

When POLDER geometric observations are made with a large range of scattering angles, it is possible to distinguish between spherical and non-spherical particles of the coarse mode. On May 2003, such conditions are mainly present in the south hemisphere.
Important loadings of non-spherical aerosols appear from West-Africa to South America and from Arabia to South India (desert dusts); they also appear over Mediterranean Sea and Caspian Sea. By contrast, the oceanic aerosol appears as large spherical particles over the whole southern oceans.

Mean optical thickness of large spherical aerosol at 865 nm on May (left) and June (right) 2003.

The cloud cover is important on the Earth (mean value close to 60%) and POLDER has a low spatial resolution that does not allow clear observations between fractional clouds. That explains that only few regions are observed with a high frequency (> 20 days) per month.
On the contrary some regions, in white on the plate, are always cloudy (ITCZ, North Pacific ocean) or in the night (Antarctic).Most of the time, there is no continuity over the coasts because the cloud masks are different over land and over ocean. 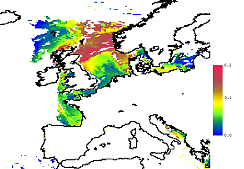 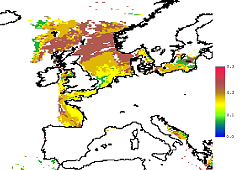 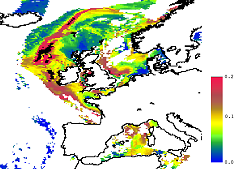 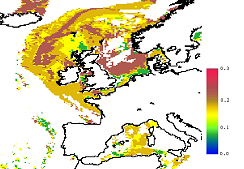 All news about mission